You will need to make sure you are in your application's root directory, then run:

To make getting started with Node.js on Heroku easier we will begin executing the build script by default if it is defined in your package.json. This change will go live on Monday, March 11, 2019. Read more about this change in our FAQ.

For users with an existing build script that they may not want run during the build, this will require some slight modifications to their package.json. The modifications are simple and mechanical, and this CLI tool will make updating as easy as possible. 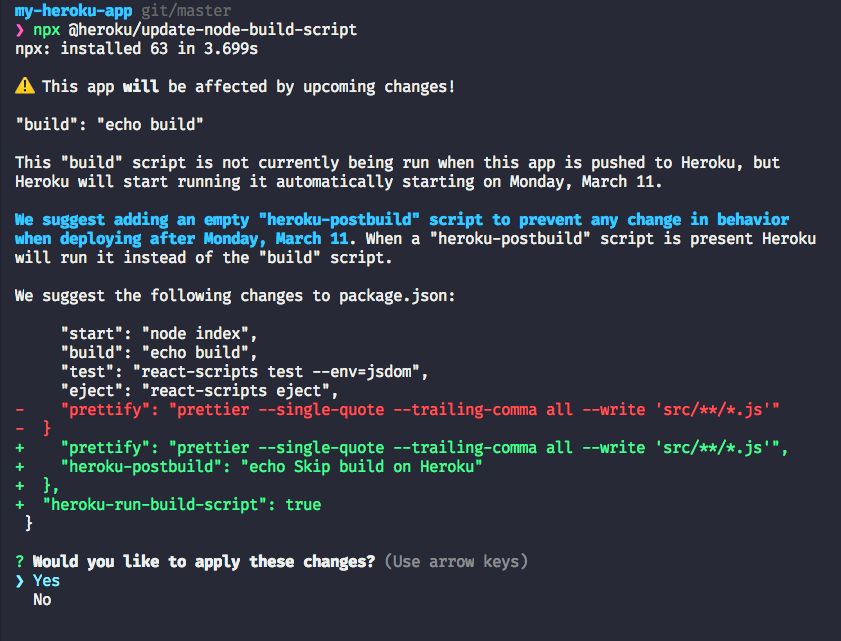 You will need to make sure you are in your application's root directory, then run:

npx is a tool that comes with the modern verions of npm bundled with Node. If for some reason, npx is not available on your system, you can install it with the following command:

and then you can uninstall it when you are finished:

What does this command do?

When it runs it will inspect the contents of your package.json file, note which scripts you have defined, and suggest a modification that will opt you in to the new build rules while maintaining your existing build behavior.

It will make no changes without your explicit approval.

Feel free to inspect the source of this tool.

I don't want to run an npx command on my system

No problem! This tool is provided only as a convenience. The changes are documented in this FAQ and are simple to perform manually.